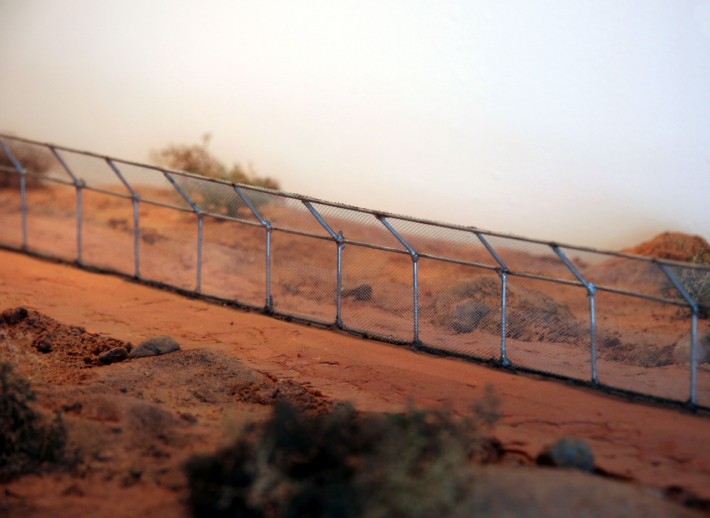 Landscape Sections is an ongoing series presenting a cross-section from nature as a still and subliminal image of a timeless environment. This environment may be interpreted as transitional, either being destroyed or in the process of healing.

The border between Mexico and the United States and the complexities surrounding it are now central to Mexican and US politics, creating some of the most important and divisive issues of our time. This series of miniaturized landscape sections represents the borders/crossings between countries in varying degrees of conflicts with its neighbor. In this series, each of these borders is symbolic of important global issues in the world today. Their constant presence in the media places them in the mind of the world’s public. As a result, these borders have unintentionally becomes world icons. Frequently, they are barren lands, devoid of people except for the occasional border outpost, border crossing stations, or border towns. This is often because of defensive design, terrain issues, accessibility, or lack of infrastructure. The borders of these nations present main iconic twist in global issues that are unintentional. Most of these borders have flourishing environments unhampered by man, not destabilized with urbanization and industrialization. Wars and conflict are mostly fought over resources, territories keyed to these issues. It is these issues that are paramount to our planet in all regions of the world.

Detailed ink drawings and Research (U.S./Mexico Border and Return to U.S/Mexico Border) in support of the project and its research can be viewed in the respective sections.